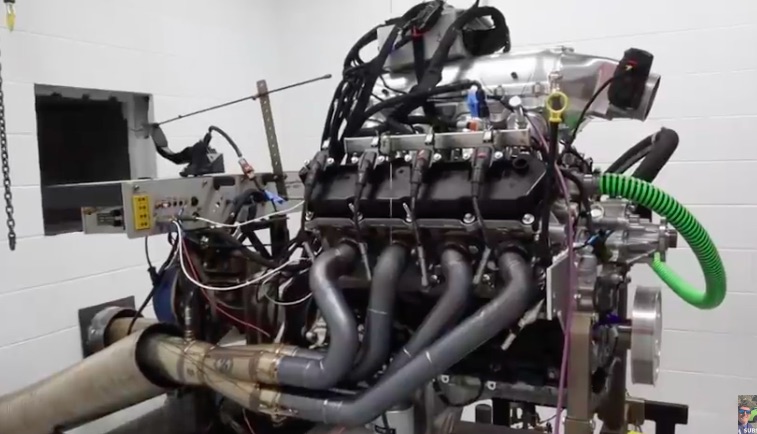 Ok, this is really starting to get awesome. Brian Wolfe the legendary Ford engineer, drag racer, and blue oval horsepower maker has really started to stand on his 7.3L Godzilla development engine and the horsepower numbers are getting scary good. The video you are going to see takes you through several dyno pulls, talks about the parts that have been stepped up from the production engine, and also previews the fact that this engine is making the power in a non-optimized form because the whole long block has been created and planned for a 3.0L Whipple blower to ride on top of it!

It’s clear to us that this engine combo has some serious potential for people who are late model Ford performance fans and it is clear to Wolfe because he’s building a business around the platform, providing engine builds and upgrades to customers. He worked with Whipple on the blower stuff and the company has developed a bolt on unit that fits under the stock hood of the Super Duty trucks that this engine can be found in. It is not the big boy 3.0L unit but it’ll make you smile wide nonetheless.

The first pull we see, the engine makes 700hp @ 6,700 RPM and the second pull we see, the engine makes 789hp ay 7,600 RPM and sounds bad ass the whole way up the rev range. The heads are not wildly modified, there’s a set of custom Wiseco pistons, a camshaft by Charlie Westcott, and killer stuff from the likes of Manton, Visner, and others. If you love engines you will love this video.

Press play below to see this awesome update on the Brian Wolfe 7.3 build!

One thought on “Godzilla Roars! Watch This 7.3L Ford V8 Make 789hp Naturally Aspirated As It Awaits A Blower”