Cheap Turbo Combos! Is This Ebay GT45 Clone The Best Turbo Ever? 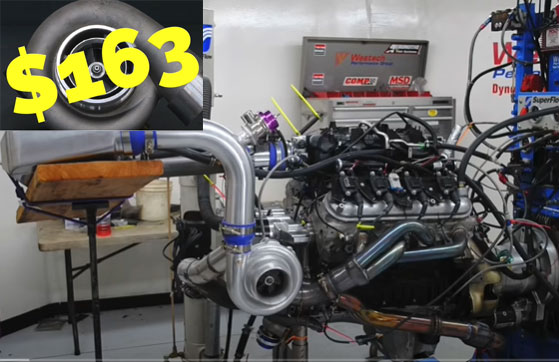 If a $163 turbocharger sounds awesome to some of you, and scary as hell to others, that’s okay. You are our people. On the one hand getting something like this that cheap just makes you giggle and get giddy. After all, think of the fun you could have with one of these cheap bastards! On the other hand, you think “huh…I wonder how long before this thing grenades and takes out the entire engine on it’s way to the grave?” Either one is a valid reaction, and one we’ve had ourselves. I happen to have one of these sitting around waiting to go onto another LS at some point, but Richard Holdener has strapped these suckers to everything known to man and made some impressive power with them. We’re talking everything from 2.4 Liters to 7.4 Liters, and everything in between. In fact, all kinds of combinations you wouldn’t expect along with all the ones you do.

But before we get into that, do you guys think these turbos will live? Some say no. Some say yes. Some have them and love them, and some say they have failed. I say they aren’t going to be the turbo you push to its limit every single moment, but if it is a “clone” or knockoff and the reverse engineering was done correctly, then you’d think this thing would live if you don’t beat the holy hell out of it all the time. But what are your thoughts?

Would you run it?

How To Convert A 4-Door Tri-Five Chevy Into A 2 Door In Your Garage. Watch How Boninfante Tests Their SFI Bellhousings By Exploding Flywheels Inside Them!