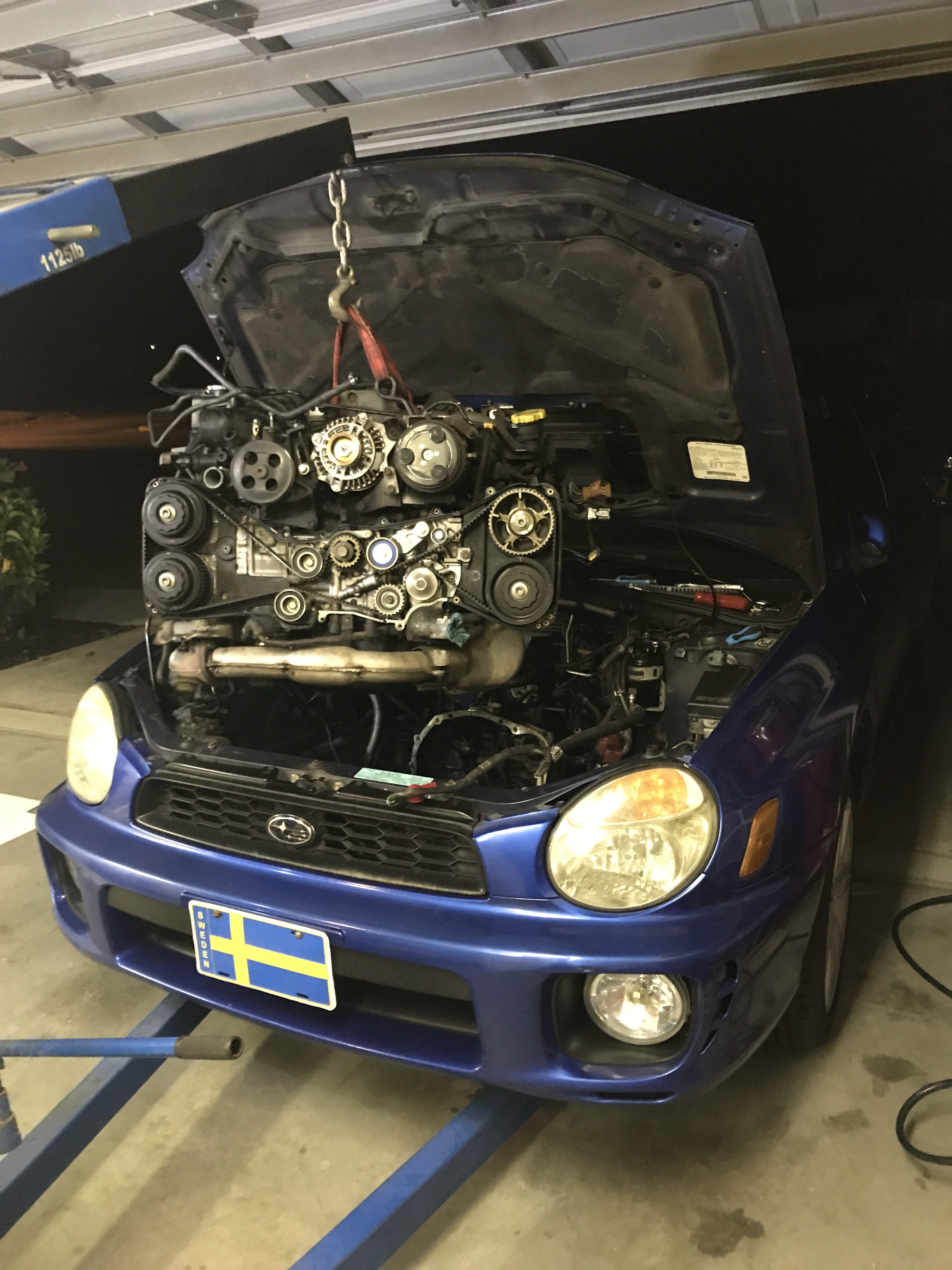 (Words and photos by Steve Baur) – Long before I had seen one on the road, I was driving them in the PlayStation game Gran Turismo and watching them race in the FIA World Rally Championship. Maybe it was the color, that bright World Rally Championship Blue hue, or maybe it was the unique “bug eyes” that reeled me in. Whatever the reason was, I plunked down the money for a brand new 2003 Subaru WRX in the fall of 2002.

Seventeen years and some 230,000 miles later, the little turbocharged, all-wheel-drive rocket still puts a smile on my face whenever I drive it, but for some reason, the car’s 2.0-liter boxer engine started misfiring on occasion and the issue got progressively worse.

Over the years, the WRX has been steadfastly reliable and long-lasting. The original Bridgestone tires were replaced around 48,000 miles, not because they were close to their wear marks, but because they had lost their edge in the winter. The front brake pads lasted over 50,000 miles and the rear pads went close to 90,000. Then there is the stock clutch—it was still working just fine when we finally lost compression in two cylinders at 232,000 miles.

As opposed to many WRX owners, I kept mine largely stock for nearly the first 100,000 miles. After that, I added a cat-less up-pipe out of the internet-brewed fear that the stock catalytic converter was going to explode and send bits into the turbocharger. I added a catted downpipe when the converters on the stock one started throwing codes. But I think not cranking up the boost in the early part of its life is largely what helped make it last as long as it has—it surely wasn’t my wife’s rally-inspired driving during her daily commute!

Eventually, the Subie started to run rough on occasion. The issue would disappear completely sometimes, so it was difficult to pin down a diagnosis. Eventually, it reared up and stayed long enough for some part replacement therapy. I threw some new ignition coils at it hoping for an easy fix, but they didn’t make a difference.

Around this time, I met fellow Subaru enthusiast Garrett Smuck who is the store manager at my nearby AutoZone, and I found out he knew far more about their inner workings than I did. After I performed a compression check and found zero compression in one cylinder and 20 psi in the one next to it, he had me pull the timing cover to make sure the timing belt, which had just been replaced a month prior, hadn’t jumped. It hadn’t, so it was time to decide whether to rebuild, buy a new engine, or as Garrett pointed out, buy a used EJ205 JDM import.

It was the last option that was most appealing. There are a number of Japanese Domestic Market (JDM) importers in the Orlando, Florida, area just a couple of hours from home, and the price was right at around $600. Said engines are purported to have around 50,000-60,000 miles when they are pulled and shipped over to the US, and they are a direct bolt-in option provided you swap a few parts over from your old engine.

These engines are available on eBay as well, but we were able to go in person and pick out the one we liked the most from the stock available. Not surprisingly, the place was chock full of all sorts of imported engines and other car parts. The engines from Sunshine State JDM come with a 30-day warranty, which should be plenty of time to get it back in and running (more on that later), and put some miles on it to see if it’s good to go. 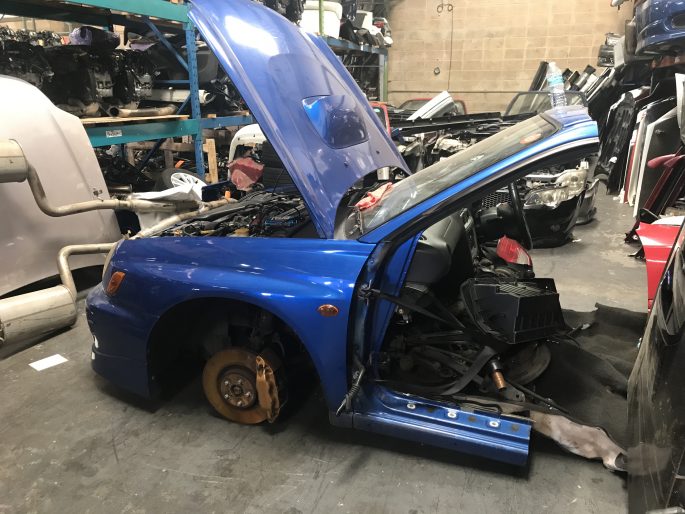 One may ask why not find a USDM WRX engine and the answer is pretty simple. A

An important thing to note is that there are several JDM engines to choose from and the decision depends on your year and application. For 02-05 WRXs, it’s better to go with the non-AVCS EJ205. AVCS stands for Active Valve Control System and basically it uses computer-controlled, adjustable cam gears to improve performance. 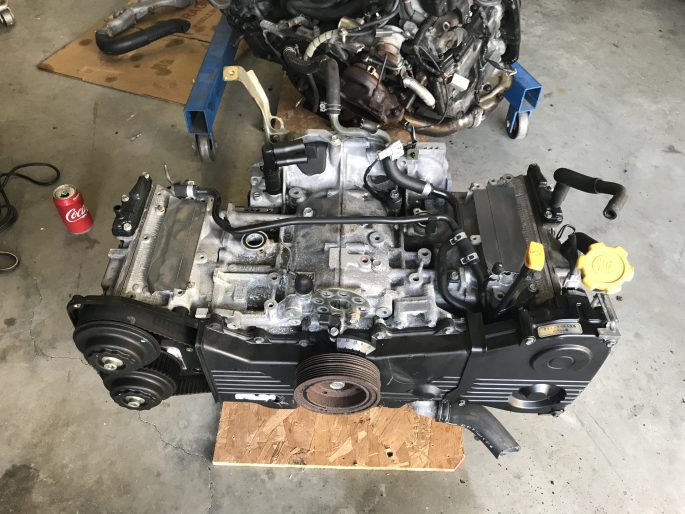 Garrett, along with many other enthusiasts, have found it possible to wire the system to work in the 2002-05 WRX, or there are companies like www.iwireservices.com that offer wiring harnesses for just such a purpose. Keep in mind that you will need the appropriate ECM to go with it as well. Here is a great link that explains the AVCS, its various iterations, and the vehicles/engines it is employed on. If you’re looking for bare bones expense, though, the non-AVCS is the way to go.

JDM engines can also be great replacements for the 2004-2014 WRX STIs, and often the preferred powerplant is the EJ20X. Just as with the WRX, most of the available engines will work, it all just depends on if you wanted a bolt-in replacement or if want to get more involved with wiring. From a cost effectiveness standpoint, the 2.0-liter engines are cheaper, more readily available, and oftentimes more reliable and durable than their 2.5-liter counterparts, making them a great replacement for the 2.5-liter-equipped WRX STI.

When shopping for a JDM engine, reviews for the company is always good to look at and if you can choose your own from the available selection, you’re even better off. Once you have them in front of you, look for signs of oil leaks and recent timing belt jobs done on them, as these are usually signs of higher-mileage engines. Something else to keep an eye out for are OEM Subaru oil filters. If you find one on the engine, there is a good chance it has been well serviced.

While You’re In There

Modern advancements such as electronic engine controls have led to greater performance in all areas related to an engine, but as these advancements have come in, there has been an increasing amount of plastic connectors and rubber hoses used on modern engines. After 17 years of age and 200-plus thousand miles of heat cycling, these items are usually at the end of their life cycle, so one thing you may want to consider if you’re in a similar situation is replacing all of the rubber lines in the engine compartment. 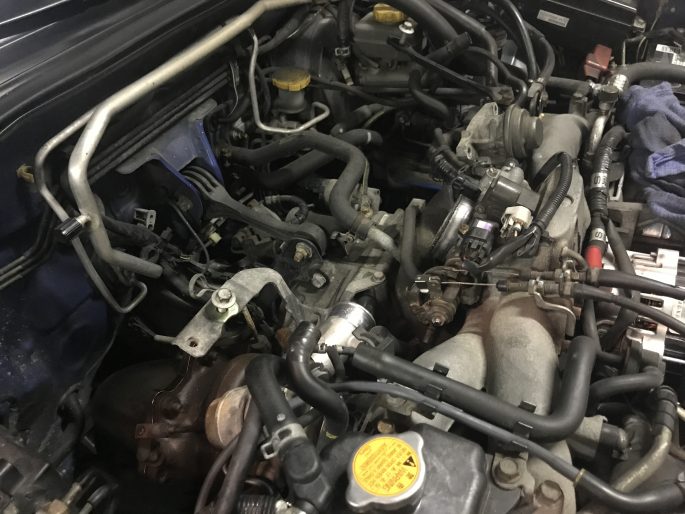 Most of the ones on this car were dry, hard, and rather brittle, so I called up my favorite Subaru dealer and ordered pretty much everything in the engine bay, and the total came to around $250. Add in the $600 for the engine and you’re still way ahead of a brand new factory replacement engine at around $2,800. On a side note, if you’re ordering from a Subaru dealer online, check on the shipping costs across a couple of dealers, as it will vary just like the list price. Using the dealer websites is nice, as you often have access to the component diagrams as well, and that can help you obtain the right part numbers.

Something else that you’ll likely encounter is any number of plastic wiring harness plugs crumbling as you unplug them. The ignition coil plugs are notorious for this, but I found the plugs in the intake manifold harness to be the most fragile. You can get new ones through iwireservices.com or one of the companies local distributors. I had to order a few, but was also able to procure a few used ones as well. 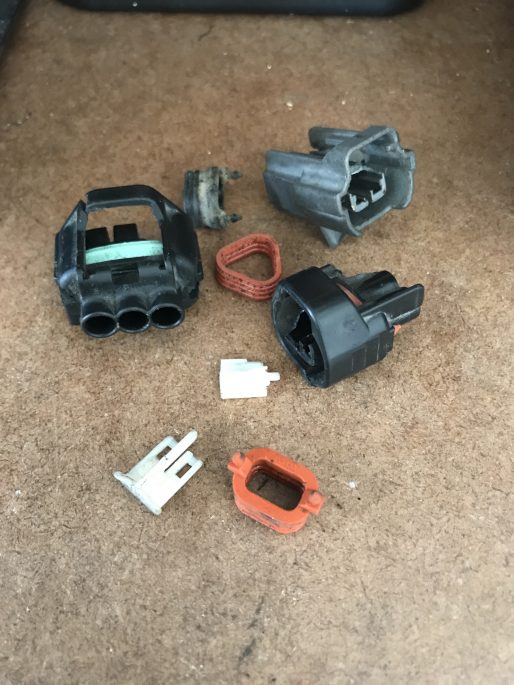 With a vehicle of this mileage and vintage, its not surprising that other items—though in good working order—were at the end of their lifespan and with the engine out of the car, there couldn’t be a better time to replace them.

One of these items was the engine mounts. While they still basically did the job, they’re relatively inexpensive to replace and the factory rubber on the originals was showing its age.

Another item, which amazingly lasted over 230,000 miles, was the factory clutch assembly. It wasn’t slipping, but given its mileage, it was in our best interest to take this opportunity to replace it. 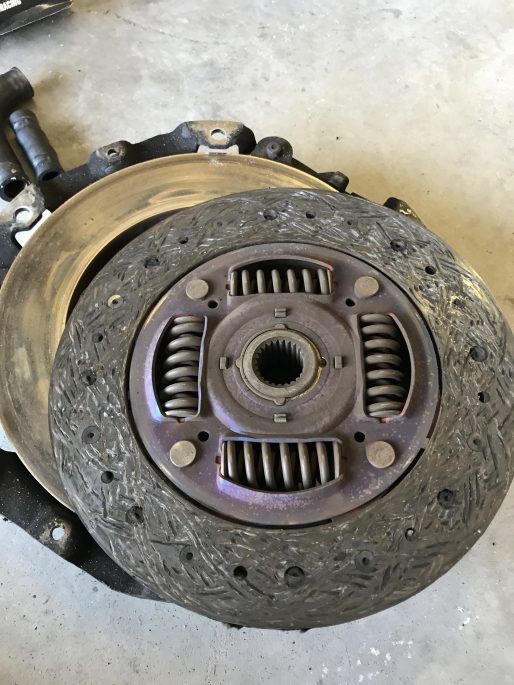 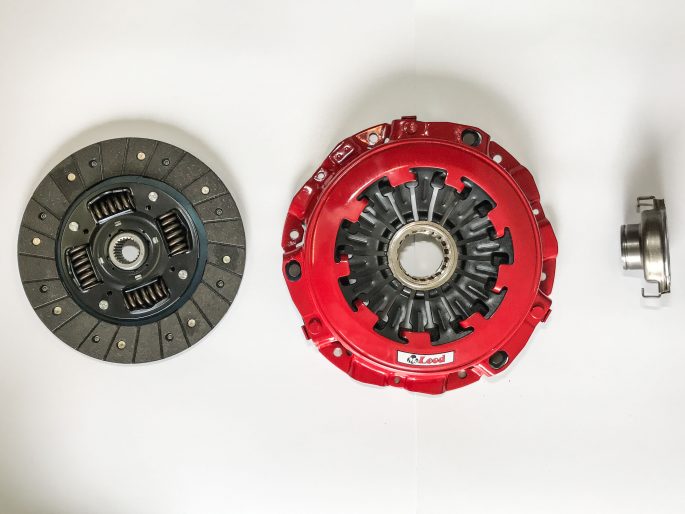 Rather than go with another stock replacement, we opted to contact McLeod Racing for an aftermarket unit that would not only maintain stock drivability, but would also provide adequate holding power for future modifications such as added boost pressure, larger turbo, etc.

Of the three clutch packages available from McLeod, we went with the Street Elite (PN 762641). It’s a diaphragm-style piece just like factory, but offers 50-70 percent more holding capability while maintaining factory like drivability. The clutch package retails for around $350 depending on where you shop, and it comes with a new pressure plate, clutch disc, throw-out bearing, and alignment tool. For the flywheel, we simply had the factory piece resurfaced locally for about $50.

Believe it or not, Garrett has the engine removal process down to less than 30 minutes, but we took a little bit longer because I had to slow the process down and over analyze everything as we proceeded. Garrett had the timing components swapped over from the old engine and the rest of the small details all wrapped up within 30 minutes after the engine was out, so it was ready to go back in. That said, I can’t leave anything alone and spent the next day power washing the engine bay and detailing various components so that the engine bay would look factory fresh once the boxer was back in. 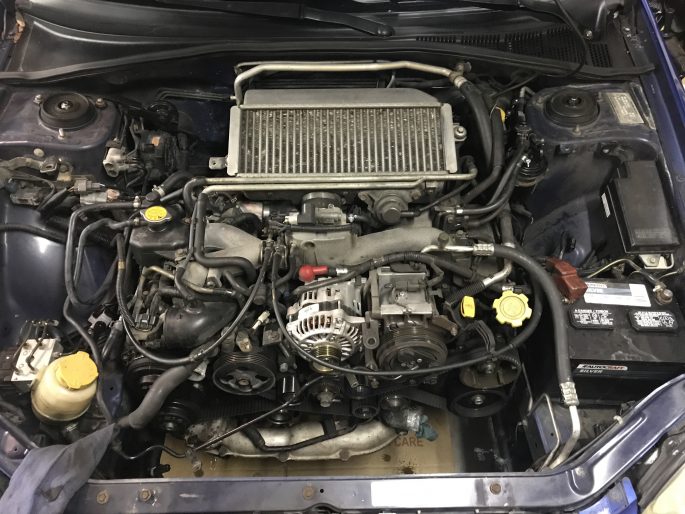 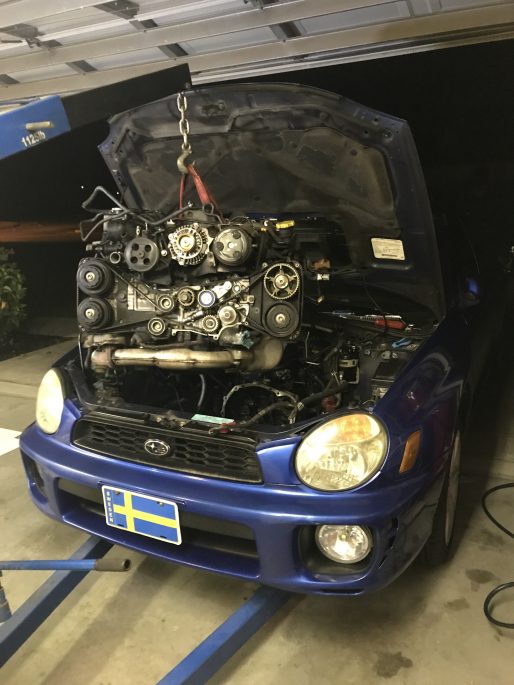 Upon the engine’s removal, we discovered that the power steering pump was leaking a bit, so I opted to replace that. This was the time where I also had to replace all of the electrical connectors that broke, and some that I had to order took days before I had them in hand and then installed. 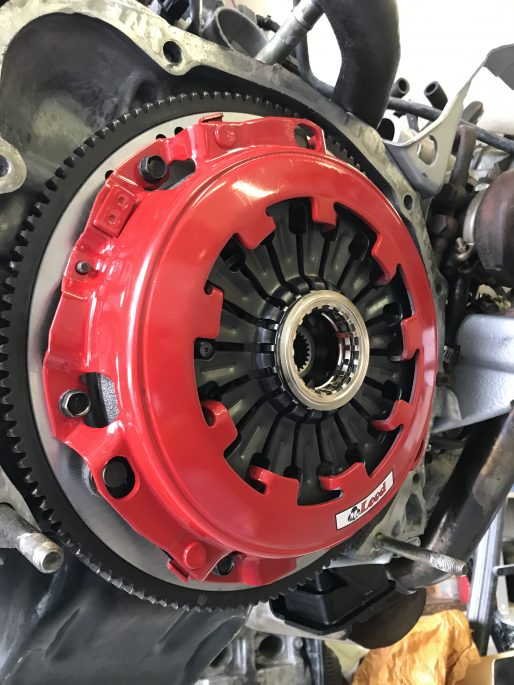 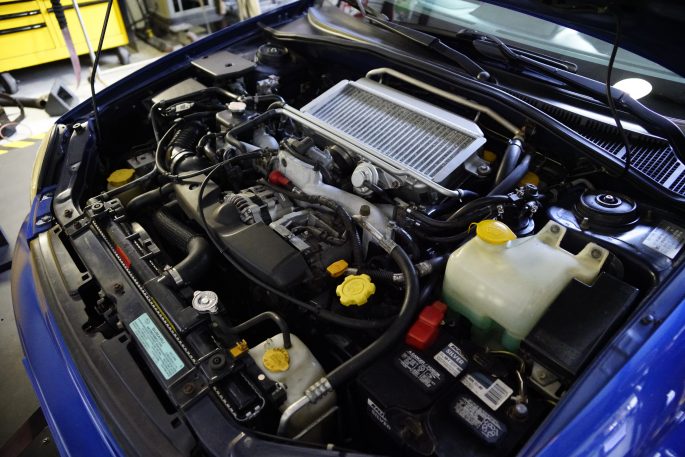 The clutch installation was easy and it didn’t take us long to get the engine bolted back in and fired up, which it did without any issue.

We spent the next couple of months driving around town with the new JDM engine propelling the WRX and put several hundred miles on the new McLeod clutch to properly break it in before some dyno testing at Tuners Inc. in Orange Park, Florida, to verify air/fuel at wide open throttle, and to get baseline performance and torque numbers as we planned for some upgrades from Cobb Tuning. As it turned out, there was a bit of a surprise, a bit of discovery, and a bit more work to follow before we could proceed. Check out the photos and captions that document Part 1 of this build, and be sure to check back to see how Part 2 turns out.

One thought on “Saving The Subie: Giving A Bug Eye Subaru WRX A New Lease On Life With A Budget JDM Engine Swap!”