Awesome Video: A Daytona Prototype Racer Hits the Streets With a Police Escort! 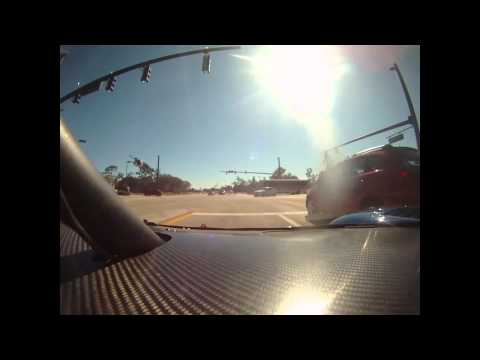 The Rolex 24 Hours of Daytona is in the book and Ford power proved to be the ticket to the winner’s circle this year. Prior to the running of the race, Ricky Taylor, the driver of the SunTrust Racing Daytona Prototype took a University of Central Florida student on the ride of his life…literally. Taylor actually took the kid onto the public roads (with a high speed police escort) and wound the car up a little. The sound of this thing is totally awesome. Between the screaming motor, the industrial sounding transmission, and the rev limiter clipping starts, this video rules.

As much fun as Taylor and his youthful passenger were having, the copper that was leading the way also seemed to be into the act. There are more than a couple moments in this video where the cop car is hauling some serious ass down the road, lights on and sirens (we assume) blaring away. We do not know the details of the contest the kid won to ride in the prototype but we’re sure he’ll be telling the story for years to come.

Imagine the horror of the other drivers on the road when the DP gets moving by revving up and smoking the tires when the small diameter multi-disc clutch locks up. If they do this next year, we’ll be the guys pretending to be UCF students and begging for a ride!

Thanks to OldSchoolCamaro for the tip!

3 thoughts on “Awesome Video: A Daytona Prototype Racer Hits the Streets With a Police Escort!”