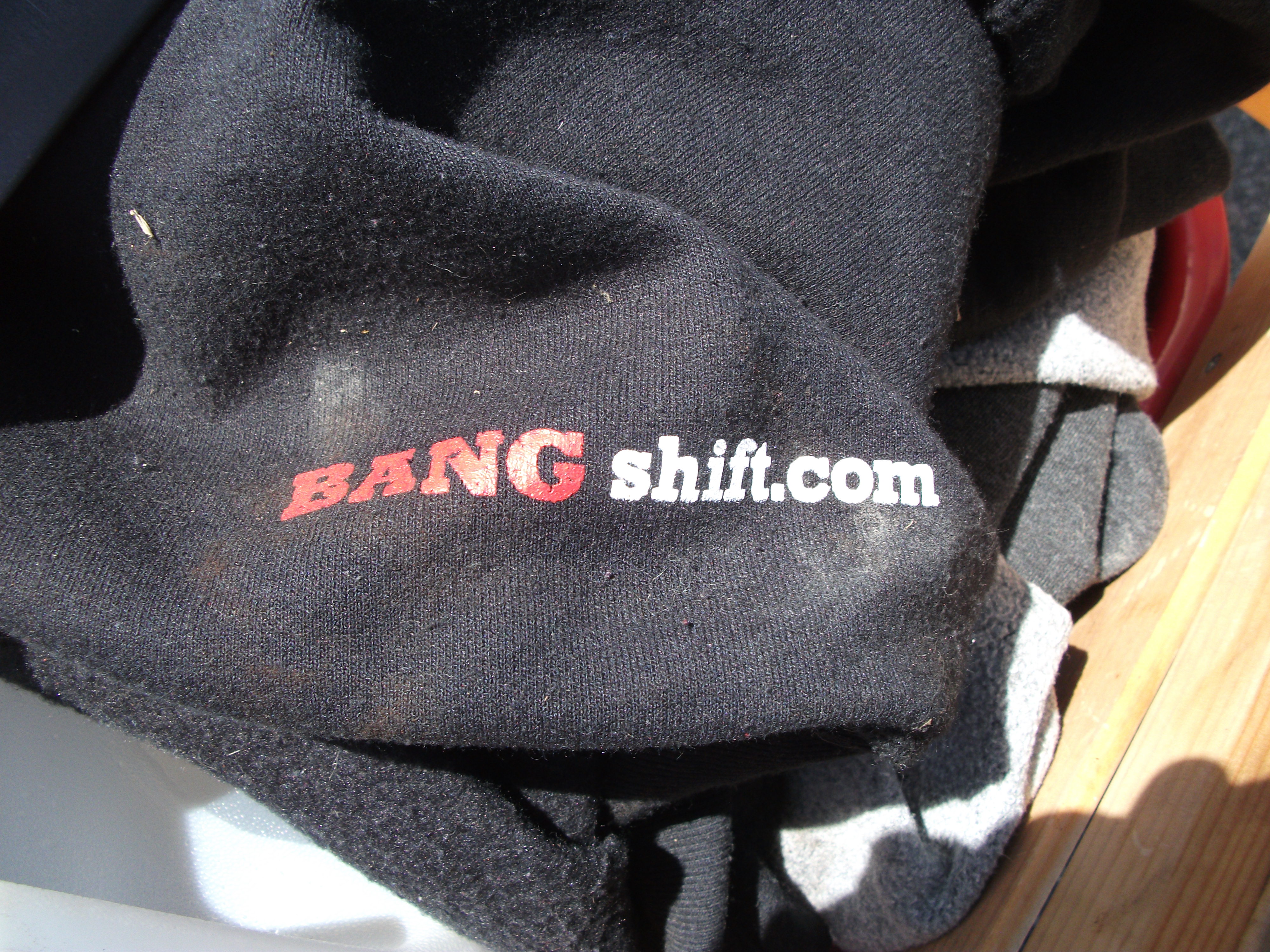 Every May, the South Shore Antique Auto Club hosts a huge swap meet in Mansfield, MA at the Xfinity Center (also known to locals as Great Woods), which is a huge outdoor concert venue flanked by some seriously enormous parking lots. More than half of that parking area is occupied by vendors, making it the biggest car-related swap meet in the Boston, MA area. You may remember our excursions to the meet in 2016 and 2015, and in last year’s installment, there were rumors circulating that the organizers of the meet were going to pull the plug based on a number of reasons, including complaints from the town. But alas, the meet was back and bigger than ever for 2017! Like usual, we grabbed a couple buddies, hopped in the truck, and loaded up the Radio Flyers to check it out. In typical BangShift fashion, we’ll cut to the chase and go straight to the pictures! 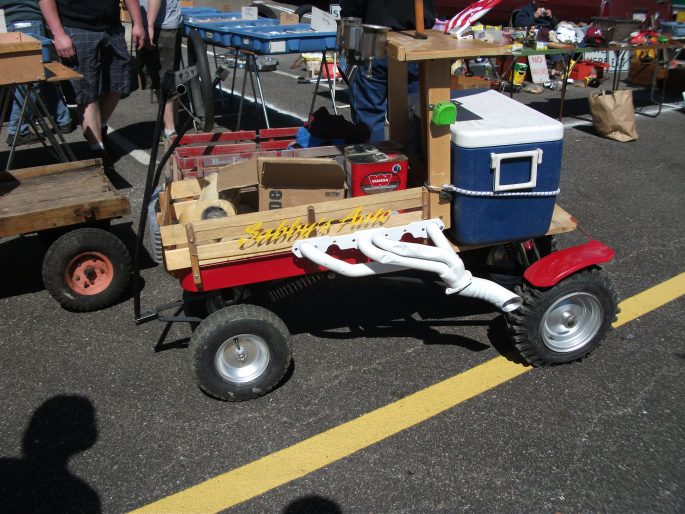 As always, half the fun is checking out the crazy parts haulers people were dragging around. This one was pretty cool. It had an extended chassis, a mean rake, shorty headers, and an onboard cooler. That tall structure in the back also served as an ancor point for bungee cords and straps, and we saw this thing getting all sorts of stuff piled high and strapped to it throughout the day. 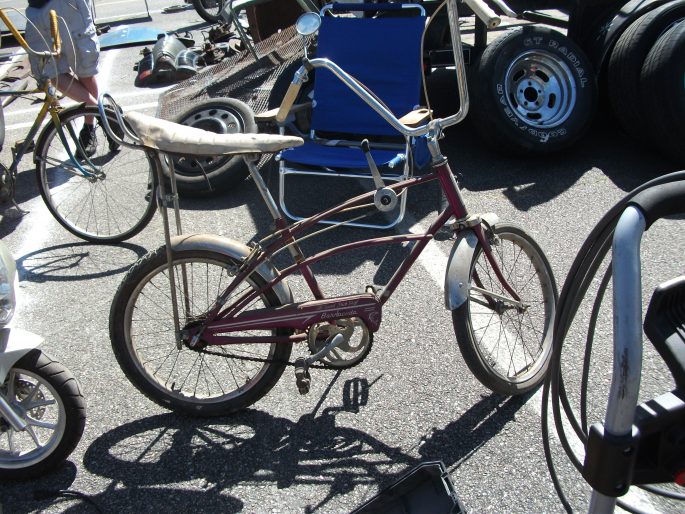 With every passing year, more and more old bikes like this sweet Ross Barracuda pop up for sale. This one dates from the late 1960’s, and the height of the Musclecar Era can be seen though it’s design. Dig that 3-speed shifter! 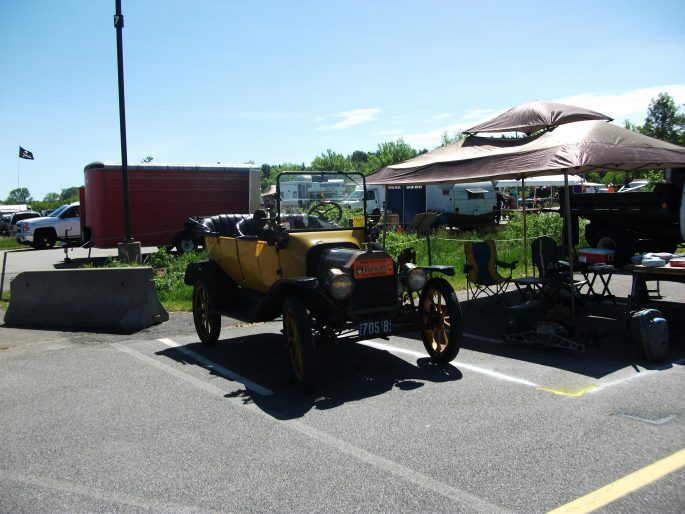 The South Shore Antique Auto Club, the people who organize this event, started way back in 1951 as a club for people restoring Brass Era stuff. It was nice to see more than a few vendors, like the one pictured here, catering to these old beasts. 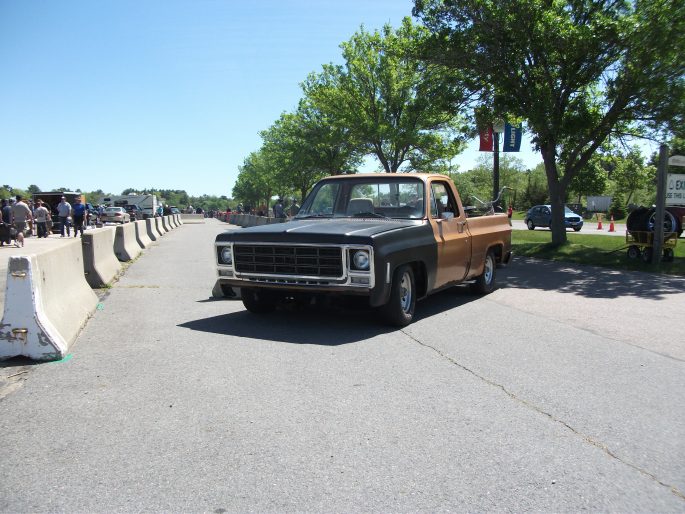 Lately, I have had a serious hankering for a cool old truck. When I turned a corner and spotted this mid-70’s C10, it didn’t help alleviate that desire. This one was rough around the edges, but who cares… look at it! (runs off to Craigslist…) 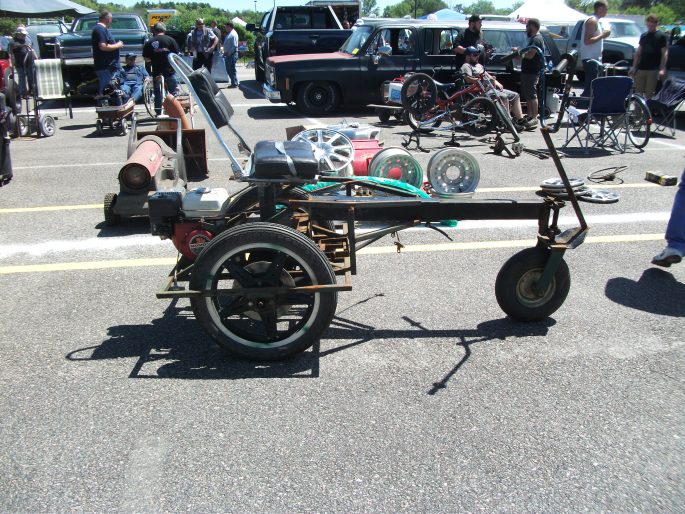 Here’s another weirdo wagon we spotted during the day. This one was powered by a small engine and steered via that tiller out front. What a freak show! 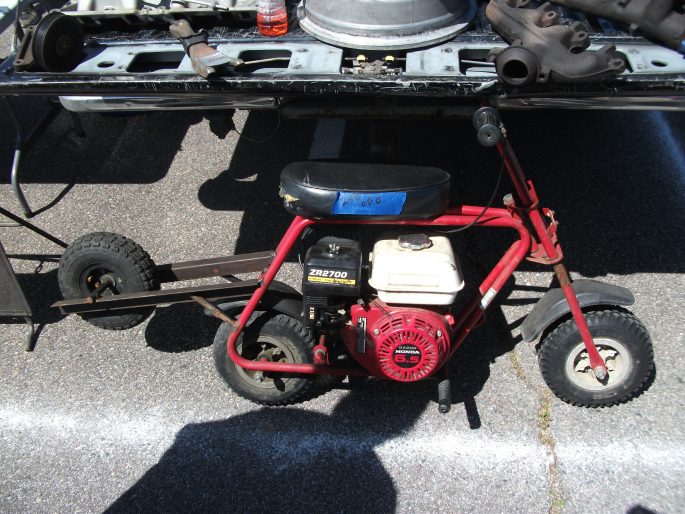 Another big hit at this year’s meet were small engine-equipped vehicles, like go-karts and mini bikes. This little guy was particularly nuts. The 6.5hp Honda on this tiny bike made it a wheelie machine, so the rear bar was added to help the rider’s skull stay off the pavement. 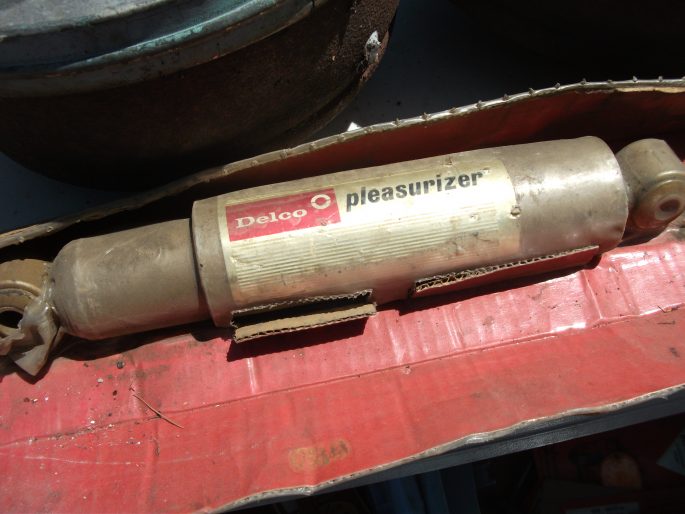 Here’s one for the How Did This Get Past The Marketing Department files. I think the name speaks for itself. 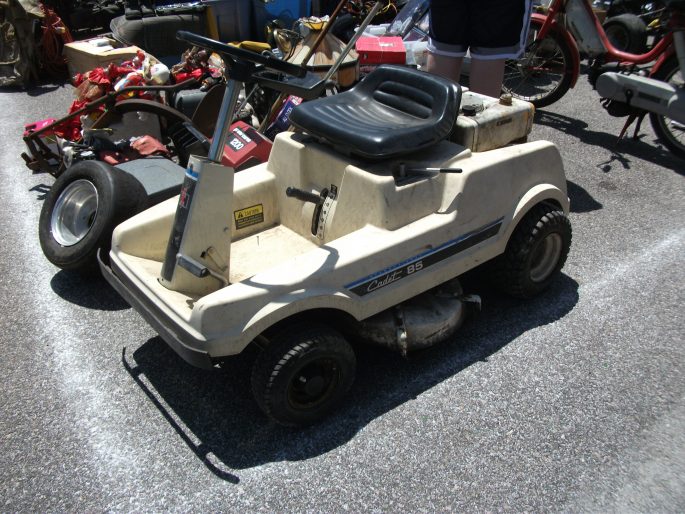 Speaking of small engine-equipped things, check out this strange old Cub Cadet ride-on mower! At first, we thought it was a golf kart, but it was a real deal mower they offered back in the day. As we were checking it out, a guy came over and told us how he made a wheelie-popping go kart out of one of these when he was a kid. Gnarly!

Apparently, that guy wasn’t kidding. Check this out! 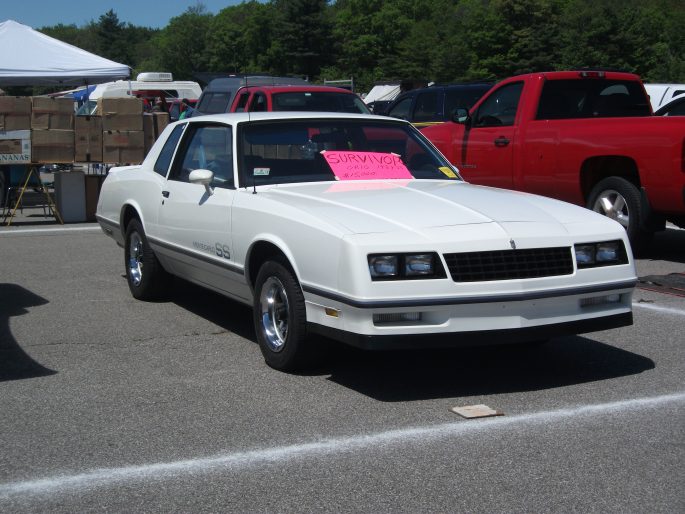 Oh Nutting? Where art thou Nutting? This 1984 Monte Carlo SS was billed as a “SURVIVOR”, which means they were asking mondo bucks for it, $15,000 to be exact. But hey, this thing looked as if it was sitting on the local Chevy dealer’s “OK Used Cars” lot in 1986, unlike the many others that have since returned to the Earth around here. It looked nearly new. 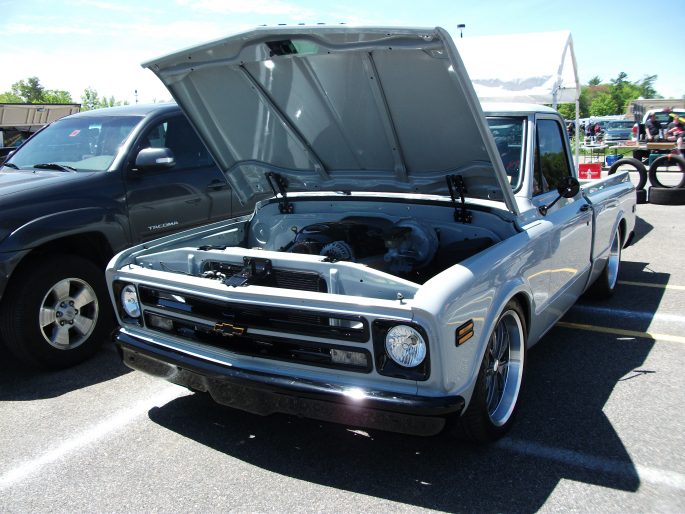 This Pro Touring-style late 60’s Chevy C10 in Battleship Grey was just beautiful. I didn’t see a For Sale sign on it, so I’m assuming the owner just parked it in the middle of the meet, popped the hood, and walked away so passers by could drool all over it, including yours truly. Such a beautiful truck, inside and out! 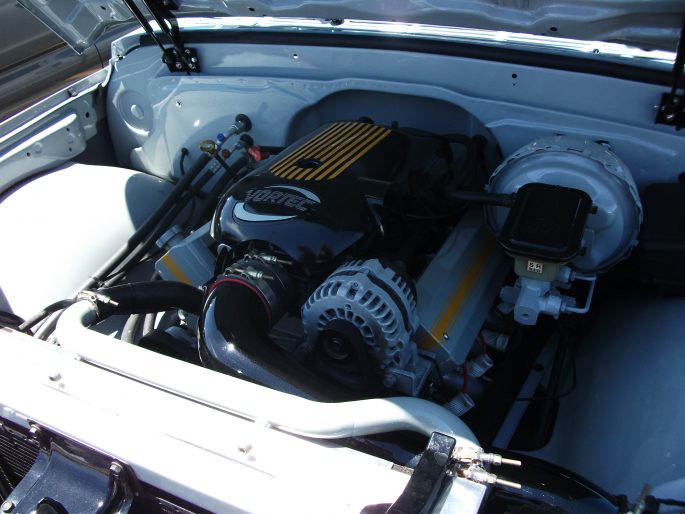 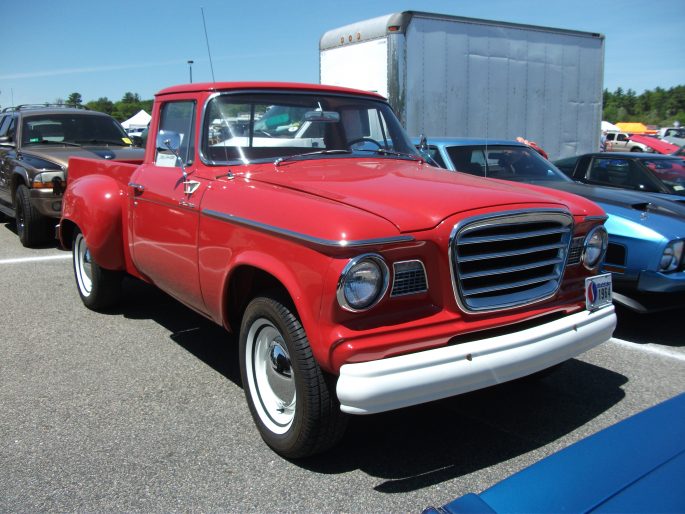 Speaking of beautiful old trucks, check out this 1964 Studebaker pickup! They really made some pretty trucks back in their time, didn’t they? This one was impossibly clean, and restored using as many original Studebaker parts as possible. The seller was asking $18,000. Think about it… would you rather have some clapped out late model truck, or this vision of beauty with a bed? Tough decision. 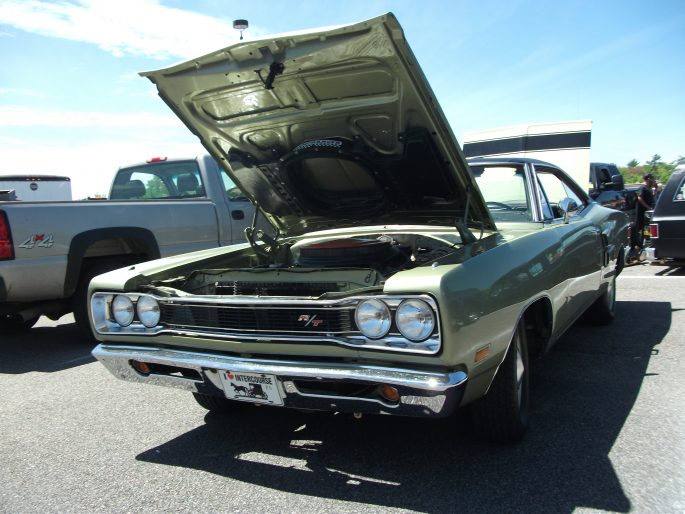 You don’t see too many classic Mopars around here, so when I spotted this 1969 Dodge Coronet R/T, my inner Mopar Guy was ecstatic. This one was a driver, and offered in the low $20k range. Whoa, what does that license plate say? 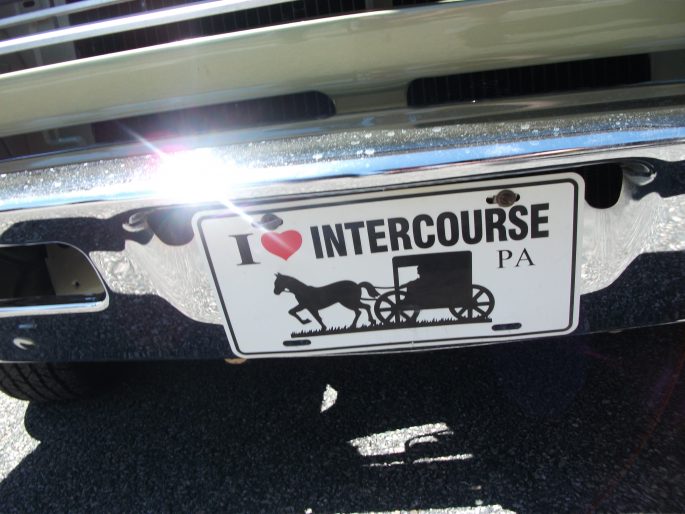 Only on a Mopar… 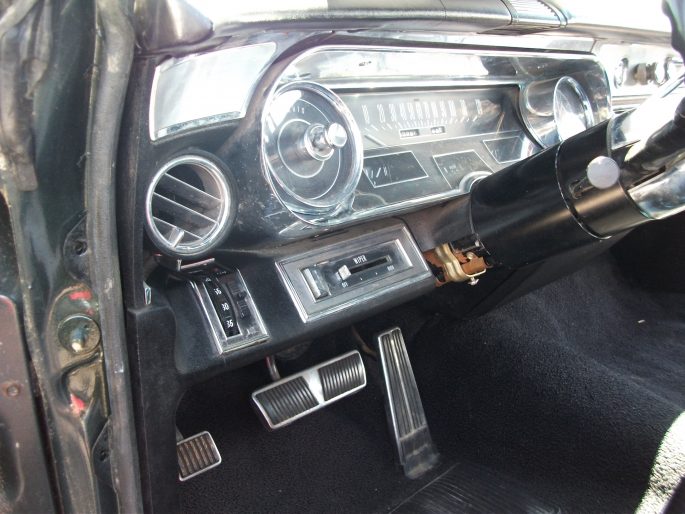 My buddy pointed out an interesting feature on this mid 1960’s Cadillac barge. Under that vent on the left, there’s a dial. That’s the cruise control. It appears that you set it for a particular speed instead of the modern way of just setting it to whatever speed you’re travelling at. It is controlled by a little electric motor perched off the side of the carb instead of the typical for-the-era vacuum operated units. 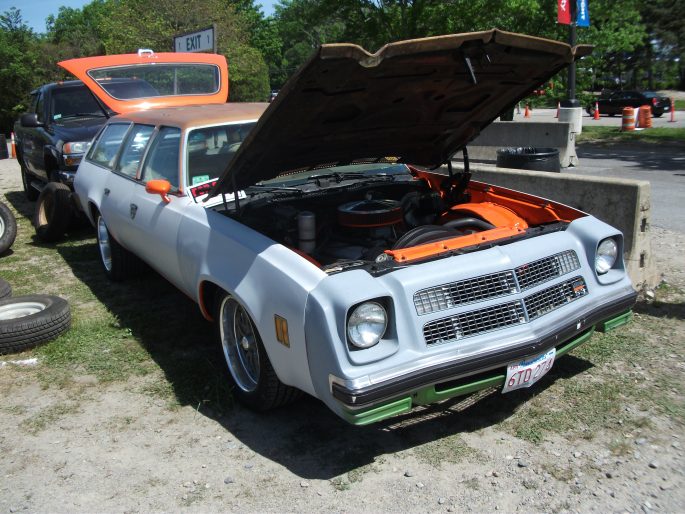 One of the funny things about swap meets these days is that it’s sort of a “Craigslist Live!”, with stuff you see on the interwebs being hawked by real people in one big central location. This 70’s Malibu Wagon has been hanging out for some time online, and it’s pretty cool but unfinished. First and foremost, it’s wearing a Laguna S-3 nose, which all of the 70’s Malibus should have! 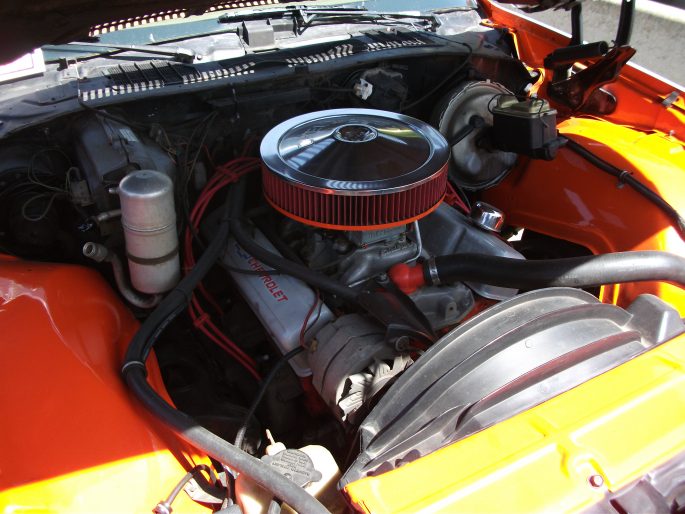 Under the hood of the Malibu was your typical Small Block Chevy, and this one was backed by a four speed. Yep, it’s a bench seat, row-your-own wagon! The paint under here was shockingly nice, which makes me wonder why they didn’t paint the rest. The seller was asking $7000 for the wagon, and it needed quite a bit of finishing work, but it’s still very cool. Since it’s been up there for sale for a while, hopefully there’s some wiggle room. 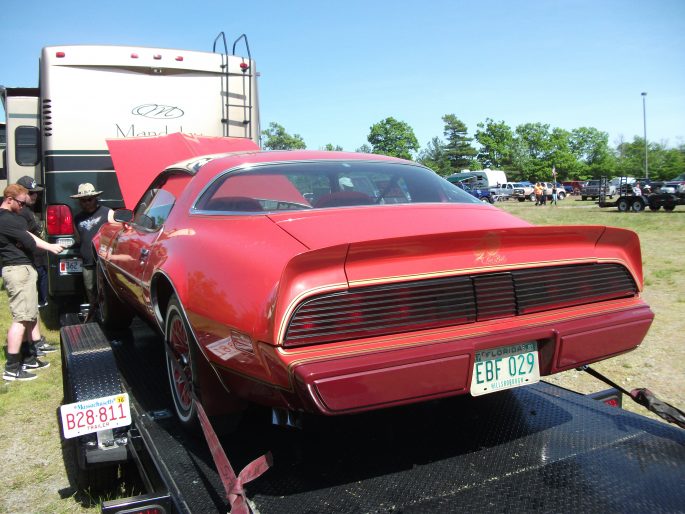 Back in the late 70’s, when Pontiac’s firechicken-equipped, machismo-sweating Trans Am was all the rage, the execs at the automaker decided to market a softer, more luxurious version to the ladies. Known as the Ladybirds, they came in three flavors throughout the years: the Skybird (Sky Blue), the Redbird (Red), and the Yellowbird (Canary Yellow). This one is obviously a Redbird, and was in astounding condition. 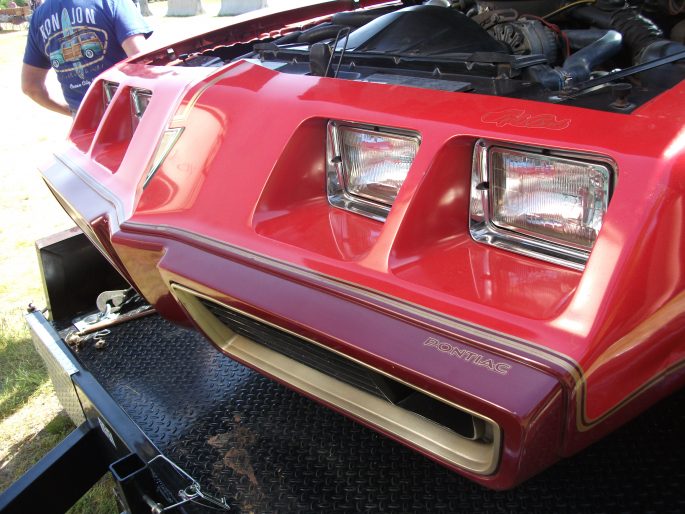 This old bird really was in remarkable original condition. The plastic grilles, which have crumbled apart from age on most cars, were still perfect, and the paint was great. All the original decals were accounted for. 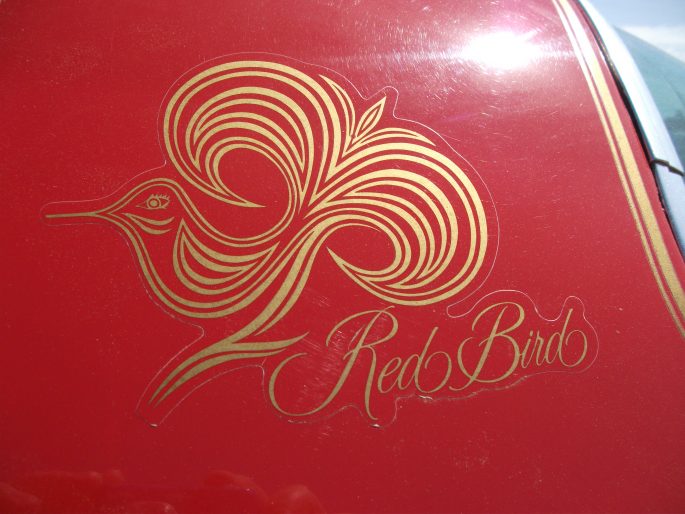 It’s the Trans Am… for girls! If you listen closely, you can hear the Fleetwood Mac emanating from the 6×9’s. 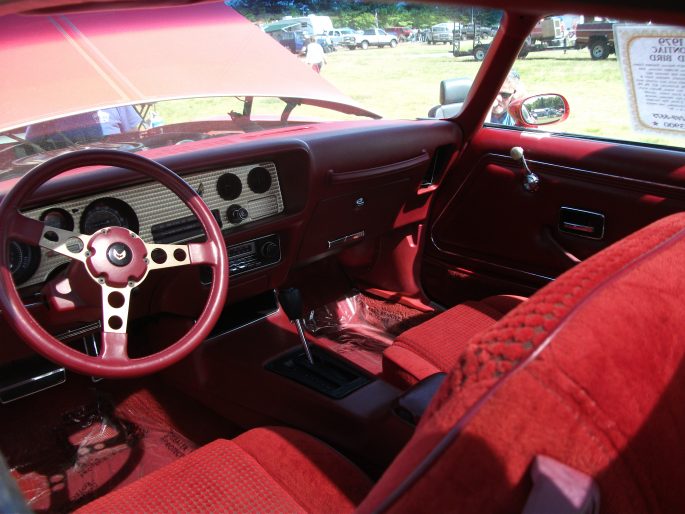 These cars were built upon the Firebird Esprit models, which were the Broughamiest of Birds. All of the Redbirds had Dark Carmine Red deluxe interiors, and I was drooling over this one, as my personal 1979 Trans Am also has this same interior. 2nd gen Trans Am fans will notice right away that the dash bezel in this one is missing the two auxiliary gauge pods to the right of the speedometer. Weird! 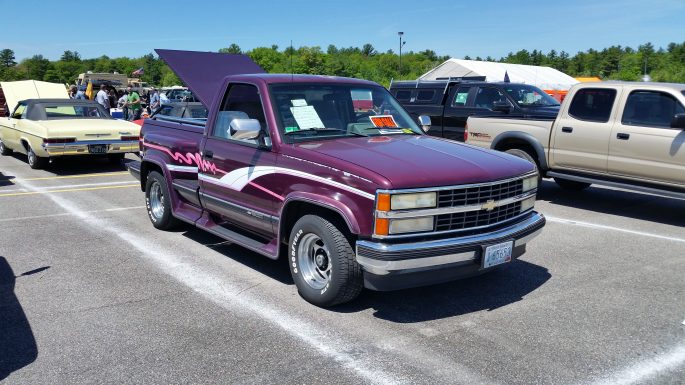 Another relic of the past, this Chevy stepside was sporting some serious 1990’s Era side graphics, ground effects, wheel flares, and a hard tonneau cover. Are side graphics like this back in style yet? Will they ever be? 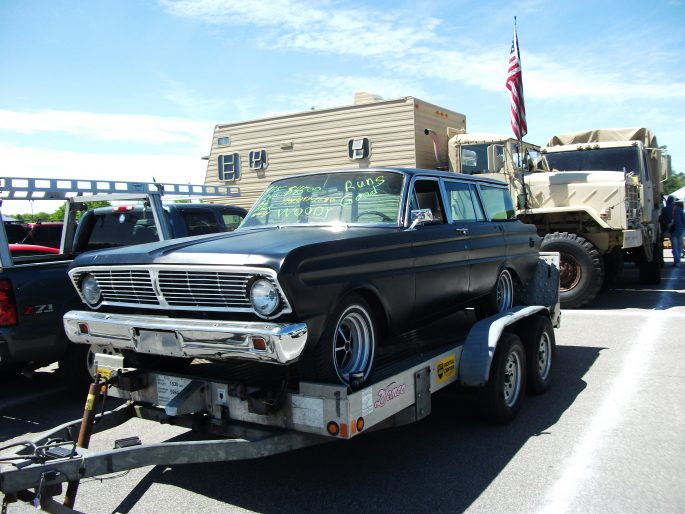 Now this is a sweet little wagon. It’s a 1965 Falcon with a 289 V8, and was originally a faux woodie, but I wouldn’t change a thing looks-wise. With the satin black and the Magnum 500’s, I almost get a Two Lane Blacktop vibe from it. I say toss in a supercharged 460, a mailbox scoop, and terrorize the country! 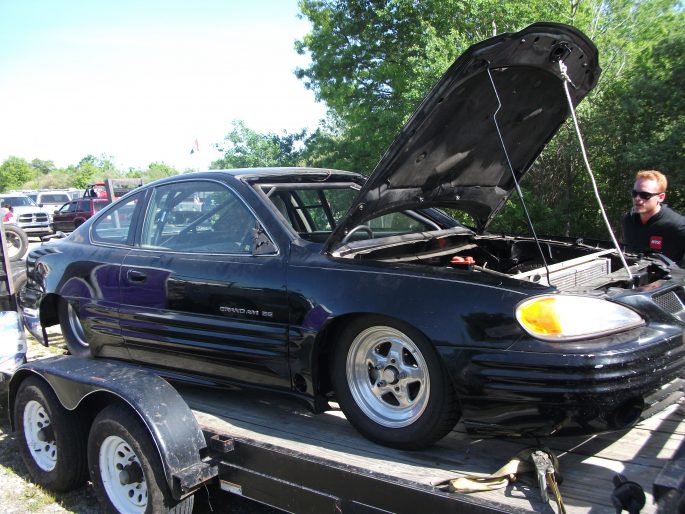 Here’s a Pontiac Grand Am that’s a lot different than the ones in your local community college parking lot! This one was fully caged and sported a chassis supposedly certified for mid-7’s. It was set up for a Small Block Chevy, but I’d throw an all aluminum Poncho in there just to be different. We dig it! 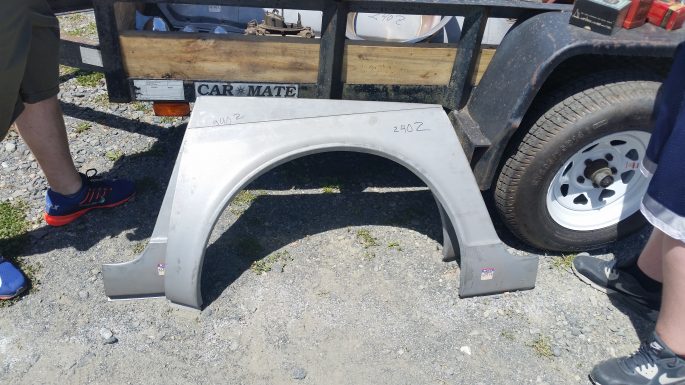 Now, to the spoils!!! Funny story about these quarter patches: A friend just bought an old Datsun 240Z that someone haphazardly hacked the wheel arches for some ill-fitting flares. The seller had bought these and a pair of outer rockers (barely visible on the trailer) for a Z he had, but found a better, rust free car to work on instead. He tossed out a price of $40 for all of it. A quick call to that friend with the hacked Z, and these were strapped to our wagons! 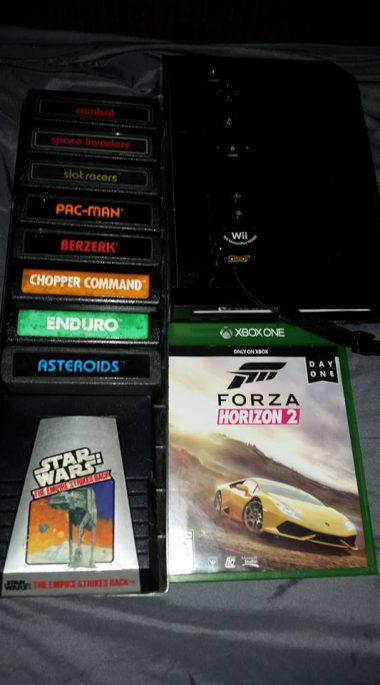 I have a strange knack  for finding old video games at car events, and this meet was no different. I scored a small horde of classic Atari games in a cool travel case (including the excellent Enduro!), Forza Horizon 2 for the Xbox One, and a working Nintendo Wii, all for under what that Xbox game usually sells for at your local game store. Nice! 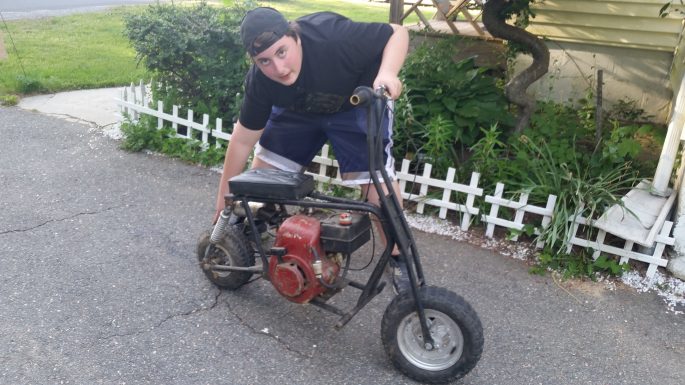 And finally, the biggest, and probably most regrettable, score of the day. The kid you see in the picture is my nephew Patrick, and he’s obsessed with small engine-equipped vehicles, as any 14 year old kid should be. He accompanied us to the swap meet, looking for parts for his own projects, and spotted this freak. I was on the fence about it, but he convinced me to go for it! According to the guys over on OldMiniBikes.com, it’s a heavily modified Arco EZ Rider Chopper. This one has an extended swing arm, the front wheel was replaced with a random one from who knows what, and the motor looks to be a 70’s Tecumseh 8-horse. I’m planning on building it as a sweet 70’s style pit bike to terrorize the paddocks at local racing events. I’ve nicknamed it Project Deathtrap. Thanks a lot, Patrick!

And there you have it; another Mansfield Swap Meet is in the books. This year’s meet looked to be a success, and the crowd seemed to be on their best behavior. Last year, a number of people were giving us trouble for taking pics and being rude in general, but this year it was all good and the mood seemed to be much lighter. Here’s hoping this one keeps getting better as the years go on. See you next year, Mansfield!