Making Big Power With A 500 Inch Caddy! GM’s Biggest Factory Offering Makes More Power Than You’d Think Stock, But What Will Some Parts Do For It? 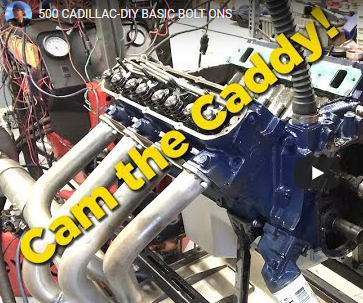 I’m a huge fan of 472 and 500 inch Cadillac engines. I’ve been a part of what would become the world’s fastest Cadillac powered vehicle, I’ve built Caddy powered street cars, and I’ve done some cool Cadillac engine builds in cool Cadillacs as well. But when my friend Richard Holdener bolts one to the dyno at Westech Performance Group and then flogs the hell out of it after adding some hot rod parts, you know it is going to be good. If you are curious, or are planning to build your own Caddy engine, then this is a must watch. These engines have high nickel content blocks, are great for making power, and are lighter than their equivalent size engines from other makes. Stock a 1970 472 made the same horsepower, and more torque, than the 375 horsepower 396 that came in a Chevelle. It made 375 horsepower and 525 lb feet of torque while the 500 incher, initially found in the Eldorado only, made 400 horsepower and 550 lb ft. That’s serious power that was capable of burning tires for days in these big cruisers. And it made all that power at relatively low rpm which made them a riot to drive.

Watch these two videos so you can see Richard putting one through its paces. I think the numbers will impress you as these are real dyno numbers, measured using today’s best dynomometers.

The Chop Top Dodge Crusader Gets A Cheap DIY Interior. Watch And See Just How You Can Do Your Own Interior At Home. 203 Miles Per Hour With An RC Car? Kevin Talbot Is Building One Hell Of A Project, That's For Sure!